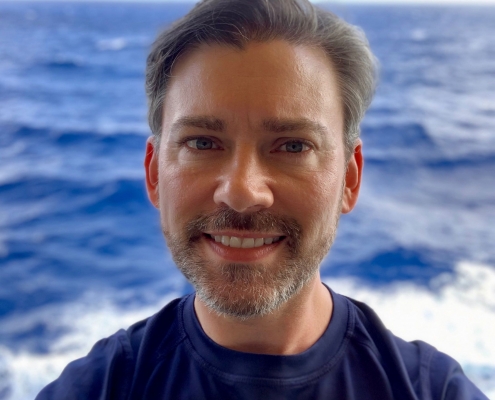 Devin’s love of tarot, and of all things mystical, esoteric, and New Age, was sparked at the dawning of the Age of Aquarius, when he received his first tarot deck (the classic Rider Waite Smith) and Eden Gray’s “A Complete Guide to the Tarot” in 1981. Since then, for ~40 years, Devin’s understanding and appreciation of tarot as a gateway to the metaphysical has deepened and flourished.

The Den’s Maverick Mystic stays abreast of tarot trends and evolving tarot traditions through studying with tarot luminaries at international conferences such as The Readers’ Studio. Over the years he’s had the wonderful opportunity to meet, study with, and be inspired by, Mary Greer, Rachel Pollack, Marcus Katz, Barbara Moore, and many, many others. (Devin, like any good maverick, prefers to know the rules before he breaks them.) When the opportunity arose to become immortalized in a tarot deck from his favourite deck artist, Devin leapt at the chance, so he is now, and will forever be, a King of Wands.

His ‘muggle-career’ began in 1999 when Devin joined the University of Toronto as an intellectual-property expert, negotiating research contracts with industry. Today, Devin is the Director of the Research Office at the University of Toronto Mississauga, where he oversees a thriving research environment, ensuring that UTM’s researchers are provided exceptional resources and supports as they pursue their world-class research endeavours. Devin’s work in academia has allowed him to keep a close eye on the expanding limits of provable science, and findings related to topics such as quantum mechanics, string theory, the holographic universe, multiverse dimensions, and the nature of consciousness.

“My experience with Devin was warm, insightful, and accurate. After my reading, I’m feeling hopeful, appreciated, and seen. Thank you very much, Devin!”

“I loved your energy, your soul, and your spirit. Thank you! My reading was enlightening and illuminating.”